Below is just one example of the incredible response we have had.

“Dear Kids at School in Nepal,

We have been very touched by the recent disaster happened in Nepal.

Last Saturday was the birthday party of our two children: Maia 6 and Teo 3 years old. After discussing with them about the earthquake and the many schools that have been destroyed, it was unanimously decided to raise money for the schools and children in Nepal rather than receiving the birthday gifts.

The response from the little friends and their parents has been amazing and here we are with the donation from Croque La Vie Montessori School’s students and families.

We are positive you will make the best use of this donation and we would love very much a reply from you so that we can share in the class the great job you are doing. 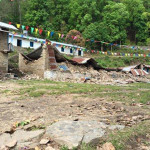 The remains of the library at Shree Mandali School

This is what is left of the library block sponsored by KASIN. Some of the classrooms are thankfully intact, others were completely destroyed, crushing desks as 2 floors collapsed.

Thankfully, the earthquake struck on a holiday when the school was shut. 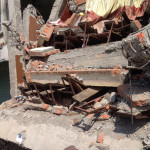 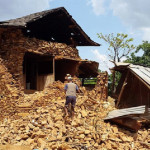 All our friends in Kathmandu are thankfully still alive although many have lost their homes.

Sadly the villages that we support were directly over the epicenter of the earthquake. The single dirt track that links Phulkharka with the rest of the world has been destroyed and even many of the footpaths are impassible. Even before the quake it was a 2 day walk to get there from the nearest town.

It wasn’t until yesterday, 4 days after the earthquake that an army helicopter finally reached the village. 98% of the buildings have collapsed and there are still many trapped under the rubble. The villagers can’t afford to use cement mortar so buildings are almost like dry stone walls held together with dried clay. Heavy roof timbers support even heavier stone roofs, the worst possible design in an earthquake prone area. 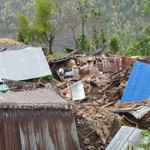 Fortunately the earthquake occurred during the day so most were helping in the fields and as it was a holiday mercifully none of the children were in school. The only people at home were the very elderly and the very young. We don’t know yet how many have been trapped.

Jyoti Adhikari who is the vice president of our charity was here with his family only a couple of weeks ago to attend our 10th anniversary celebration at Settle. He comes from Phulkharka and now owns a hotel in Kathmandu. As it is unlikely that any outside help will reach Phulkharka anytime soon he has organised a rescue mission himself using his staff and friends , many of whom originally came from the village.

Our charity has sent £3,000 to help him buy tents and essential foodstuffs but it is a drop in the ocean. 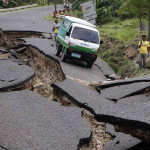 The earthquake epicentre is almost directly under the Phulkarka Region.We have not been able to contact anyone in the villages as yet as the area is extremely remote. Many of these villages are only accessible by 4WD followed by hours and even entire days walks away from main roads at the best of times. We have heard that over 90% of the buildings have collapsed as they are made from simple stone but have no other information at present.

It will likely be helicopter access only for these remote villages and the aftershocks are continuing. When the emergency rescue operation is over, these remote communities will need a huge amount of support to survive and we hope to able to help them but our resources are limited.

If you think you can help please consider a donation to our Virgin Money site.