In 2013 we provided a new classroom for one of the more disadvantaged schools in the region at Dhadakarka. The older classrooms had mud floors and the walls were cracking as monsoon rains swelled the nearby stream. The vibration from boulders being swept down the stream was destroying the foundations of the existing classrooms. In 2015 the whole school including the new classroom was destroyed by the earthquake and in 2016 we raised enough funding to rebuild the school which we opened in November 2015 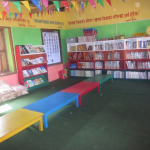 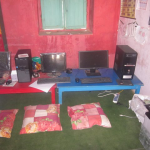