Schools update after the trustee’s trip to Nepal 2015 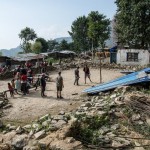 4 teachers plus the Head
Nearly 50% of the village population are illiterate. All the classrooms had been destroyed, sadly including “Wendy’s” classroom of which they were very proud.
Nine rooms need to be rebuilt including an office.
There was no school for a month after the earthquake but now the children are being taught in several temporary classrooms. Whiteboards and some furniture supplied by KASIN were being used. There were 84 students on role (one less than last year) and 73 were present when we visited, in spite of it being the time of the rice harvest. We had a productive meeting with Kemal, the Head Teacher and some of the VDC committee. Kemal’s son was there. He was educated initially at Dhadakharka and speaks good English. We have his contact details. We completed an Intitial Survey Form for the Pahar Trust and have sent them school and site details for the potential rebuild.
The community is desperate to have the school rebuilt and is very willing to contribute in the form of labour. Some of the villagers had already been to an earthbag house building training course. We gave the school some story books, pencils and paper and spent time with a couple of the classes doing “circle time”. 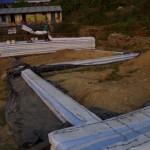 Naburaj wasn’t there so we spoke to the Deputy Head teacher and some of the staff.
33 classrooms were damaged in the earthquake and 22 were destroyed. Children were being taught in temporary classrooms. Plenty of evidence of the KASIN supplied chairs, cupboards, tables and whiteboards being used to good effect. It would have been difficult for the school to function without these so we have to consider it as money well spent. The Digital projector that we supplied for last years teacher training was also being used in the Agricultural College.
They have 700 students on roll, (730 last year) 25 to 30 left after the earthquake but some are slowly returning. The school has just obtained accreditation for its higher education courses so this should boost numbers in future by attracting students from further afield. Very good results from the Agricultural College Students, 100% SLC pass rate. Overall SLC pass rate 55%.
The same two graduate teachers were still at the Agricultural College. They seemed highly organized and spoke excellent English . They had several projects in the pipeline.

The idea is to move away from subsistence agriculture towards cash crops.The Agricultural College still has its computers but use is limited as there is no internet connection. Students are taught computer skills and are encouraged to present some of their work using MS Office.
They are handicapped by lack of mains electricity (they have some solar power) and a poor road link to export products. Poles have been installed for mains electricity but completion has been delayed by the earthquake and then by the blockade. Jyoti is trying to get Wi-Fi at Montari Sky Camp, which could then be linked to Shree Mandali.
The school library still has 1700 books rescued from the earthquake. These were heaped in a room and although a librarian was employed, there was little she could do at the moment. They needed more specialist books. The school acts as a central library for the outlying primary schools and local community. Members (20 Rupees/yr) can borrow books on a weekly basis.
The government has just supplied some good Science Equipment. This will be stored in a central room and can be booked out to class teachers. The room can also be booked for demonstrations and experiments. Potentially a big improvement on last year. The Rebuilding Program – Massimo has agreed to fund three classrooms and one meeting room and work should begin shortly.
Earthbag house type classrooms are being constructed by another NGO but work is proving more expensive and time consuming than expected. The four classrooms will be used for pre-school children. This type of construction would not be suitable for older age groups.
Roz, Liz and Julie worked with some 4 to 5 yr olds leading a circle time in English based on colour and short sentences. The children enjoyed it even though they found it challenging. The session concluded with the children singing a song in English. Liz spoke with the Y2 teacher showing her the work and messages and good wishes from Water Street School in Skipton. The children worked to produce some replies over the next few days. 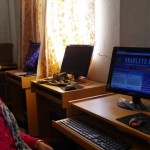 Most of the school had been destroyed apart from the computer room, and the reception classrooms and a few others which could be repaired. Coincidently Howard Green from The Pahar Trust had visited a few days previously and had agreed to build 8 or 10 rooms. They need 18 rooms. The toilets had been destroyed and the children are now using the forest. The library had collapsed and 1000+ books had been destroyed. The remainder were stored in a damaged room. The Pahar Trust had no plans to build a library. They needed more Y11 and Y12 books on marketing and commerce but these were expensive. They also needed some more Nepali storybooks. We donated some maths workbooks from the UK and they were much appreciated. The networked computers had survived and the school did have intermittent internet. The same computer teacher was there, she spoke some English.
Last year we tried to develop a Connecting Classrooms link with this school. The application was approved by The British Council but in the end failed because of communication difficulties. Dinesh seemed wary of a teacher exchange and perhaps this was a step too far.
This year Bradley School near Skipton had produced some messages and drawings for the children and had also donated a large box of coloured pencils and paper. The Headmaster had written a message to the Head at Tamang Kharka and had asked if they could develop a link with the school and possibly fund a library. We established this link with Dinesh and the computer teacher. They were both very enthusiastic and sent an email back to Bradley school thanking them. Hopefully this link will be ongoing.
The Headmaster at Tamang Kharka wrote a message to return to Bradley School. Liz and Pat will deliver it on their return. Liz, Julie and Roz worked with a group of younger pupils to return the messages and also did some circle time sessions. The class teacher was very helpful although it was obvious that there had been very little interaction before. They need some better posters, reward stickers, pritt sticks ,glitter etc. overall it was a good session. £100 to this unit would make a difference. 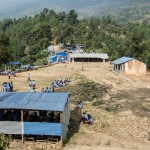 Overall this school was functioning well under the circumstances and purposeful lessons were being taught. The school grounds had undergone some settlement during the earthquake and there was some concern that much of the land might be unstable. Jyoti thought that Tamang Kharka would be likely to be funded by several NGOs and possibly the Nepali Government as it was on a more usable road link.

All six classrooms destroyed
4 teachers including the head.
30-35 students, down from 45 last year.
23 students present (12 in the kindergarten)
Good community involvement. The school was originally double storied but the top floor was completely destroyed. They are using the damaged lower floors as an office and storerooms. The government carried out a geological survey of the land and decided it was unsafe. The school will either have to relocate or will be closed down. No timescale as yet. Solid land has been found above the road but it needs clearing at present. As yet no permission is forthcoming from the government to build a new school. A Japanese NGO has considered the site but due to low student numbers has rejected it. The school has been left in limbo with no timetable for closure or rebuild. In the meantime the school has received funds from a German couple, which could build 1 classroom. 4 are needed though plus an office.
They have some immediate demands.

Future aspiration. Solar panels and a computer.
This is a proper school with enthusiastic teachers. Roz and Andrew visited this school and would recommend KASIN give them a sum of money for their immediate needs. Saroj has agreed to be a conduit for the funding if the trustees decide to go ahead.

Schools the trustees did not visit this time. 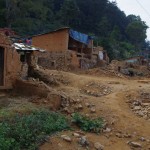 Pat and Liz also visited the site of an after schools club in the Kathmandu Valley not far from Jyoti’s Farm at Balarju. This is a Newari area and another marginalised community. The area was largely destroyed by the earthquake and was the site of a community food camp for 600 people sponsored by Jyoti after the earthquake. Rather than just hand out food, Jyoti trained and employed some of the population to build a small earthbag house. This is now used to house an after school club catering for about 25 children (3 to 11). It has 2 teachers paid for by the community (one speaks very good English) It runs from 4:00pm to 5:30pm (gets dark) daily. 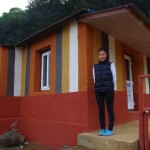 Children come for help with their homework and sometimes receive food and participate in other activities. On Saturdays it opens for picnics, poetry competitions, quizzes and sports activities. The children don’t pay to go there and in future the teachers could attend training at Asher’s Tiny Seeds Nursery in Kathmandu. They have a few chairs and a table for the children to work on. 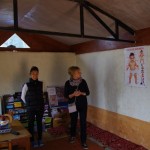 This community doesn’t respect education and children are not given the opportunity to do homework at home. This facility provides a lifeline for them. They can’t use the school building because its too far away. This could be a good project for a UK Primary School to sponsor and if successful could be rolled out in other districts.
The cost might be about £300 without the batteries and solar panel.
Jyoti suggested that it may be time for KASIN to start to move away from the Phulkharka area once Dhadakharka School has been rebuilt. This area would be a more accessible and even more needy area in which to operate.