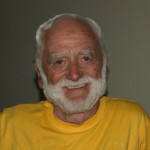 Arthur Benbow is known locally as the Globe Trotting Pensioner and over the past 10 years has traveled most of the world and much of it on a bicycle see. (www.arthursmemoirs.co.uk)

Since becoming a widower in 1993 Arthur has supported and raised funds for many UK Charities including the British Heart Foundation, Ty Hafan Childrens Hospice and the NSPCC.

It was his 2003 visit to Nepal, one of the World’s smallest and poorest countries, which made him aware of the urgent need to provide an adequate education to the younger generation of this depressed but friendly country. 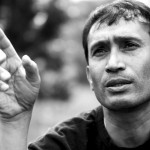 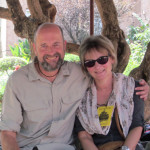 Pat is a retired teacher with 37 years of classroom experience and an ex Head of Geography in a state grammar school. He has also worked for several exam boards and has been responsible for checking and revising A-level question papers and mark schemes for Edexcel. He has been involved in many local charities and is currently a member and treasurer of Kirkby Malham Parish Council. Pat is also a member of Settle Rotary Club.

Pat had been involved with KASIN through his wife Liz but after travelling to Nepal with the trustees in October 2014  started to play a bigger role in the charity. The trip was a life changing experience and he was particularly impressed by the way the charity provides help directly to the local communities with minimal running costs. The charities links with Harihar Timilsina as a teacher trainer, Dinesh as head of one of the local schools as well as Jyoti Adhikari and Ecotrek with his support and links to the local communities were so good that he felt he had to be involved. 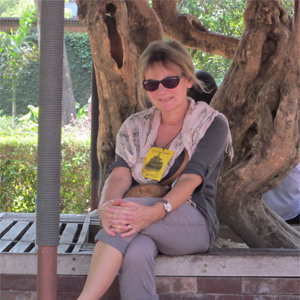 Liz Wherity is a retired Assistant Head Teacher with 37 years classroom experience with 4 – 11 year olds. She is also married to Pat an ex-Head of Geography in a grammar school. They have three children and two grandchildren.

Liz joined KASIN as a Trustee in may 2013 after Mark Ashton another Trustee inspired her during a trip to Nepal in April 2013. During the 12 day trip Liz visited a school in the remote village of Mhajkhanda and was immediately struck by the lack of any basic facilities or resources and how relatively simple it would be to make a difference.

Liz feels her experiences in a variety of different schools as a teacher, mentor, monitor and manager would be invaluable to KASIN and hopes to be called upon to contribute in the near future.

Liz also met Hari and Dinesh on their recent visit to England and helped with their presentation and school visits. She felt that she formed an excellent relationship with both men and would love to continue with this role in the coming years. 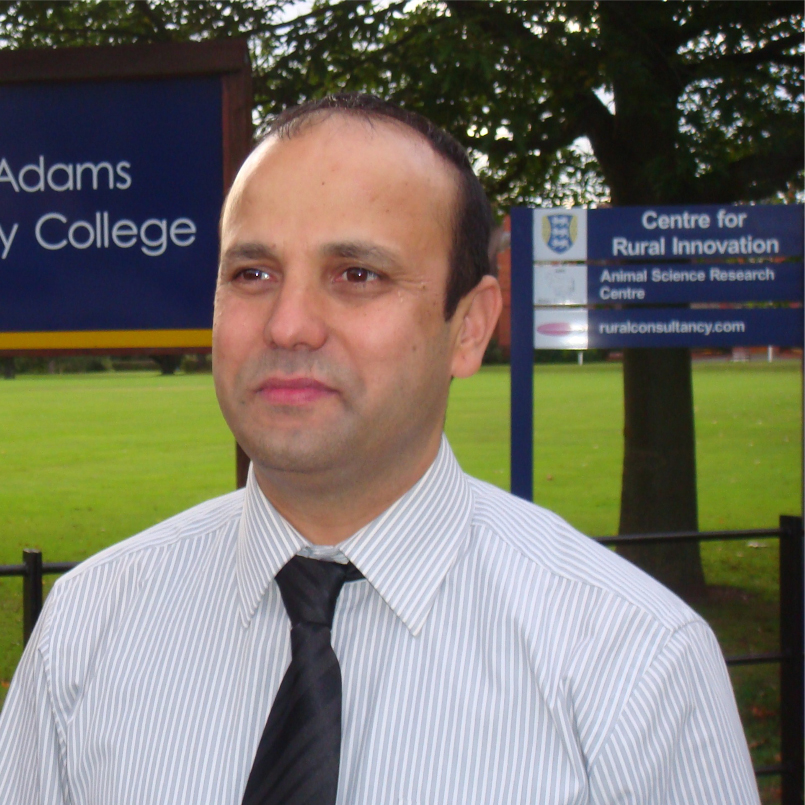 The Trustees are pleased to welcome Mr. Mahesh Adhikari born in – Lamjung, Pokhara, Nepal. Education : Bachelor in commerce from Tribhuvan University, Nepal. Further Degree : Advance Diploma in IT from City and Guild 2001-2003, London. Worked in International INGO (Save the Children US 1994-1999) as Program Support Coordinator. Lives in United Kingdom Peterborough since September 1999. Charity Organisation : President- Peterborough Nepalese Society (2010 to date) 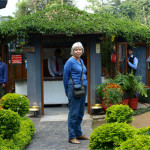 Jill first visited Nepal on a cycle tour in 2003 and fell in love with this beautiful country and it’s happy but disadvantaged people. She started to sponsor two children at Splendid Valley School and returned with Arthur in 2007 for the inauguration of the new school buildings. During this visit she was able to meet the children and their families; a unique experience for her. On her retirement from work in July 2011 she was pleased to accept an invitation to be a trustee for ‘Kids at School in Nepal’ and has since been instrumental in the production of our first Newsletter. Jill said “I am looking forward to my next visit to Nepal when we hope to visit the schools in the remote area of Phulkharka”.

John has been a regular visitor to Nepal since 2008 as a trustee of the Ikudol Forest Trust, supporting a re-forestation project south of the Kathmandu valley.

His involvement in Nepal started in 1999, when John met Alan Iles, a horticulturist from Skipton, who worked in Nepal in the 1980s, setting up a tree nursery in Mahjkhanda, a community heavily reliant on trees for timber, cooking fuel, and animal fodder. Before Alan’s untimely death in 2006, the Ikudol Forest Trust was founded by John and 3 other trustees, inspired by Alan’s legacy of trees to the community. John first heard about KASIN on a trip to Nepal with Pat and Liz Wherity in 2013,

He has since visited a remote part of east Nepal where education is making a vital difference to children of tea estate workers. Many families in this area face subsistence living and children still risk being exploited as tea pickers, so education can give them a real chance of a better life.

John started his career as a project engineer for Westinghouse before gaining an MBA at Cranfield and subsequently holding a senior marketing post in the printing engineering industry. After a change of direction, he spent 18 years as General and Company Secretary of L’Arche, a registered charity supporting people with learning disabilities.

John now runs a landscaping business in the Aire Valley, regularly teaching horticulture to children at St Anne’s Primary school in Keighley, which is twinned with the government school in Mahjkhanda. He is also a practicing BACP registered counsellor.

John has published this blog describing his visits to Nepal each year. 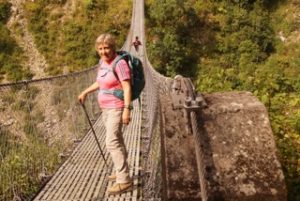 Pam has been interested in the education of the very young child since qualifying in 1969. She mostly worked with the 3-6 year old children, owning and running a nursery school for over 25 years. She also worked as a validator and mentor for the Bristol Standards Quality Assurance Scheme, helping to raise standards in schools and nursery schools. In 2016, Pam and her sister, Jill took part in a sponsored trek to Everest Base Camp in aid of KASIN. She also visited the Phulkharka region. She is looking forward to going back in the future to see the difference being made to the lives of the children and their families. 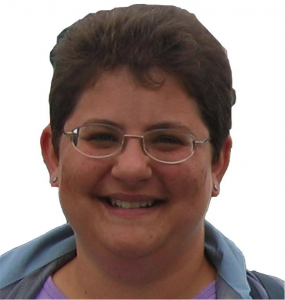 Jane’s connection with Nepal started in 1996 when given the opportunity to travel there as part of an experimental trip with Oxventure. This started a life-long love of a country and its people. during the trip, Jane visited the Kumbeshwar Technical School in Patan and was so struck by the work there that she has been a supporter ever since. In 2014 she returned to Kathmandu to volunteer at the Kumbeshwar Technical School and to carry out teacher training. This led to a connection with KASIN and meeting up with Harihar, who was a huge support in planning the training at the school. Jane has written this blog describing  her experiences at  Kumbeshwar.

Since returning from Kathmandu, Jane has taken an active role in running the “Kids of Kumbeshwar UK, which has now come under the KASIN umbrella. She has given talks about the school and her time there and is committed to raising funds to support the education of children in Nepal. 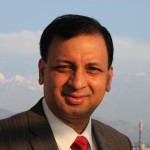 Padam Simkhada is a Professor of International Public Health at the Centre for Public Health and Associate Dean for Faculty of Education, Health and Community at Liverpool John Moores University, UK. His research focuses on global public health.  He is interested in different aspects of international health particularly in public health problems in developing countries. His current research are on maternal health, health promotion, migration, sex trafficking, reproductive and sexual health including HIV/AIDS. He has been involving on capacity building activities in Nepal. He has published a wide range of peer reviewed journal articles and book chapters related to his research field.

Prof. Simkhada was born in Gumdi, the remote village of Dhading Nepal. He studied in Tamang Kharka Secondary School, Gumdi Dhading. He graduated from Tribhuvan University Nepal. He has completed M.Sc. in Public Health and Health Promotion from Brunel University and PhD from Southampton University. Before he moved to Liverpool John Moores, he was Senior Lecturer in International Health at Sheffield University and Programme Co-ordinator and Lecturer in International Health at the University of Aberdeen.  Previously, he worked for Save the Children (UK) and Ministry of Health in Nepal. He is also a Visiting Professor in Nepal. Adjunct Faculty at Datta Meghe Institute of Medical Sciences Nagpur, India.

Having been enthralled by her dad’s stories of travels in Nepal in the late 1960s, Sophie has always been interested in this fascinating country and its people, and dreams of visiting one day.

She heard about KASIN through a mutual friend and is so impressed by the charity’s dedication and commitment to making a positive difference to education in Nepal. The Trustees do not claim any expenses so all donations go towards this aim.

Sophie was a primary school governor between 2011 and 2017, worked for environmental education charity the Field Studies Council from 2015 to 2020 as an administration and customer services manager, and is currently working for her local Age UK on overcoming digital exclusion.

As well as sponsoring a child at school in Jhapa through KASIN, Sophie and her sister have raised over £2,000 for KASIN via sponsored activities. These include completing the Yorkshire Three Peaks in 2016 and a three-day Lakeland fell walking challenge in 2019, spelling KASIN with the initials of five fells en route: the Knott (739m), Angletarn Pikes (565m), Shipman Knotts (587m), Ill Bell (757m) and Nethermost Pike (891m).

Sophie was delighted and honoured to accept an invitation to become a trustee in 2017 and she hopes that her skills in IT, finance and governance are of assistance in supporting KASIN with their excellent work.