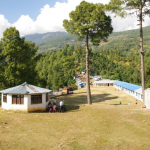 Our story began on 22nd December 2003 when founder trustee Arthur Benbow first visited Nepal on a 14 day organised cycle tour. It was just three days before Christmas when Arthur cycled through the remote village of Palubari in the Kathmandu Valley. He came upon a school with no children, it was Saturday, a day when the children of Nepal don’t go to school. However, some staff and the Headmaster were at the school.

Arthur was welcomed by the Headmaster who looked at the bearded globetrotter and said “Welcome Xmas Father, would you care to see around the school?” Conditions for the six staff and 80 children were incredibly basic with only one toilet for both staff and children.

In the short period we had been in Nepal we had been impressed by the beauty of the Country and the friendly welcome from every one we made contact with.

Sadly the country had been through seven years of revolution, mass protests & strikes and it was another three years before the first election took place when Nepal became a Democratic Republic. Add to this the fact that the main source of income for Nepal was from farming and Tourism, arising from which, state funding for education had a very low priority, with 70% of the adult population being illiterate. 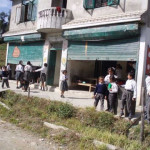 It was obvious to our group visiting Splendid Valley English School (founded in 1998) that help in any shape or form would be welcome. Bearing in mind that the best way to improve the quality of life for any 3rd World country is to provide help (not money) to educate the younger generation. So our group took the story and pictures of Splendid Valley School back to friends and family in the UK. Arising from which funding and offers of help were sent and taken out and in 2005 it was decided that we should become a registered Charity. 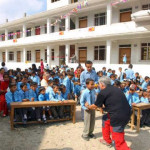 Thanks to the support we have had in the UK and beyond plus major funding from a larger Charity in Italy known as Friuli Mandi, Splendid Valley School now has a new school building less than a kilometre from the old one.

It was in October 2007 that a group of our trustees and supporters attended the inauguration of the new school building which now caters for 250 children all receiving a free education. Many children and some staff must walk an hour or more to get to school where there are now 18 staff including 16 teachers.

One year later in October 2008 a meeting was convened near the school attended by the sponsors from Italy, the UK, parents , staff and members of the community. The object of this meeting was to agree and create for the School a Community Trust which, with the help from a local legal representative, was completed within twelve months. The School is now under the control of a management committee who report to the Board of Trustees representing the parents, staff and donors in Italy and the UK.

Having completed our project in the Kathmandu valley In 2011, the focus of our activities shifted to the Phulkharka region a more remote rural area to the north of Dhading. Because of its remoteness the schools lacked equipment and often even school buildings.

For the last eight years a group from the charity has travelled to the region and visited the eight schools that the charity supports in the area. One of the biggest problems for the schools in this area was the lack of effective teacher training. 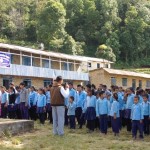 In 2012 a three-day course was held at Shree Mandali Higher Secondary School attended by 30 teachers from local schools in the surrounding area, many of whom had received no previous teacher training. It was organised and run by Harihar Timilsina, a teacher at the Police School in Kathmandu and a much-valued friend of KASIN. He was assisted by his colleagues Badra Neupane, Nilam Shrestha, K B Raiand Renee and Terry David who all gave their time freely for this worthwhile venture. The course was activities based with an ICT enabled classroom, despite the problems of unreliable electricity supplies. 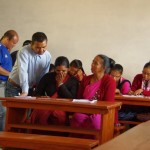 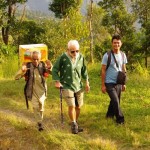 As well as training, KASIN has provided much needed equipment including new Central Resource Library comprising the adaptation of a building, a solar panel, two laptop computers & books and new floors and furniture in the classrooms of Shree Ganga Jamuna Primary School.

KASIN has also Instigated the provision of a much needed water supply for Mahendro Daya Lower Secondary School by the Italian charity Mandi Namaste and has brought books, stationery and science equipment donated by UK schools and allocated them to the schools in Phulkharka.

The Trustees wish to acknowledge a major personal donation of £1050 (130,000 Nepal rupees) from Wendy and Alan Lansdown following her wedding in 2011. Wendy’s donation was in memory of her late parents, Di and Roy Lansdown who visited Nepal in the 1990s and fell in love with the country and its people. This money was used to build a new classroom at Dhadakharka School, one of the most disadvantaged villages in this area. Sadly this new buiding was destroyed in the 2015 earthquake but in 2016 we funded the  rebuilding of the school.