Kids at School in Nepal, (kasin.org.uk) celebrated their 10th Anniversary on Friday 10th April, with a fundraising dinner at the newly refurbished Falcon Manor Hotel in Settle.

The charity was founded in 2003 by Settle octogenarian Arthur Benbow . It was just three days before Christmas when he cycled through the remote village of Palubari in the Kathmandu Valley. Arthur was welcomed by the Headmaster who looked at the bearded globetrotter and said “Welcome Xmas Father, would you care to see around the school?” Conditions for the six staff and 80 children were incredibly basic with only one toilet for both staff and children. So Arthur decided to set up a charity and has subsequently raised many thousands of pounds to support education in rural Nepal.

KASIN have built classrooms, provided educational equipment and funded teacher training. Each year its trustees travel to Nepal at their own expense to monitor the projects and to plan for the future.

Over £2,200 was raised at the dinner including a contribution of £500 from the Peterborough Nepali Community. 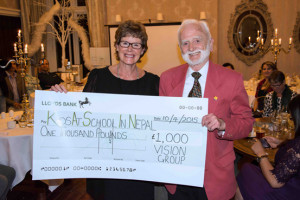 During the evening an additional cheque for £1000 was presented to the charity by Julie Cawood. Employees of the Vision Group of Companies, a textile company based in Blackburn where Julie Cawood works, were invited to pitch “Dragon’s Den” style to raise funds for a charity of their choice. 5 employees were selected, they each made their pitch and then all employees voted for their choice.  Julie’s chosen charity was Kids At School In Nepal (KASIN). It was voted the most deserving charity and was awarded first prize of £1000.

Commenting on the event, Julie said “I was up against some truly deserving causes such as cancer research, a hospital paediatric heart unit as well as a charity which was setting up sports facilities for local children.  However, the Kids At School In Nepal charity fired everyone’s imagination and received well over half of the votes.

Nepal has no natural resources, very little agriculture and has only tourism as a main source of income, so ensuring kids in remote villages obtain a basic education is their only way out of the poverty trap. KASIN is involved at grass roots and our local community here in the Dales are really helping to make a difference to the lives of these children.” 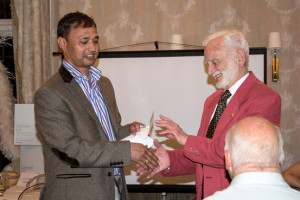