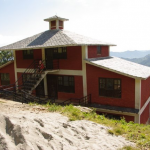 Built in 2013, KASIN funded the inaugural opening meeting in December 2013. Nabaraj has an overall responsibility. They have four teachers, two graduates and two interns. There are 87 year 8 and year 9 students that have attended at least in part by their end of school exam results. 6 or 7 students are sponsored by a Japanese charity and stay in homestays in the village as they live too far away. When we arrived many students were busy planting trees around the buildings. They are taught in two large class groups and are mostly local pupils. 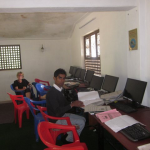 The second time we visited, the two classes were being taught formally and seemingly effectively by the two interns. The two graduates were marking work, again which seemed appropriate, in the computer room on the top floor. They were modern computers (funded from Dubai) with MS Office and Windows 8 OS. They did not have internet access. They said that they did use the computers for teaching as well as record keeping.

Outside there were some well organised raised seedbeds that were to be planted with a variety of vegetable crops, radish, coriander, lettuce, onions, cabbage etc.. These were being grown as seedlings. 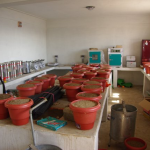 In the storeroom they had recently taken delivery of rice threshing and honey extracting equipment but they had yet to use this. The syllabus would lead to a basic qualification in agriculture.  In 2017 in conjunction with Italian charity Friuli Mandi, we built a hostel that will allow students that live too far away to commute, to attend the college.