The school was opened on 5th Nov by Pat, Liz, Jill and Pam. Chitra who liaised with the villagers and supervised the build was also there, as was Jyoti , Nabaraj and Jyoti’s cousin.

Howard, Sue and Narendra from The Pahar Trust were held up and so didn’t get there until the festivities were over.

The 6 classrooms were finished, complete with furniture and they had started to use them. We were very pleased with the standard of build.

We were greeted by the village community, bedecked with garlands and red paint before being led by a traditional band into the village. A meal was provided in a local house followed by an afternoon of speeches, singing and dancing before walking back to Sky Camp.

We spent the evening in Sky Camp and were joined by Howard, Sue, Narendra and Chitra.

We were ready to lay the foundation stone for the 2 extra rooms but Jyoti had suggested that they may not need them. Several families were migrating and it was possible that school numbers were falling.

He also suggested that they may not need a library as Shree Mandali acted as the central library for the surrounding schools and the headmaster and some of the staff could pick up and return books from there.

It was decided to delay the start of the other 2 rooms until we have more information. Howard said that he could do a another survey and Chitra and Nabaraj would monitor the use of the existing building. Saroj will also be there as he is the chairman of the Schools and Children’s fund for this year and he can report back to us.

Pat and Liz called in to the Pahar Trust Office in Pokhara and talked to The Cairn Trust about their library policy and arranged for the Pahar Trust to send on some more photos of the build as well as discussing the viability of the 2 new rooms.

We also arranged for a Nepali copy of the teacher’s book “Better Classrooms, Better Learning” to be sent up to the headmaster, Nabaraj at Shree Mandali for evaluation. If he likes it we would provide a copy for all the schools that could usefully use it.

We would also like to kit out the reception classroom at Dhandakharka. Saroj will go up there over the winter and liaise with the nursery teacher, then let us know details and costs. 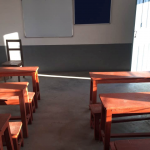 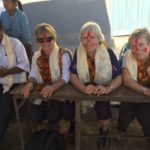 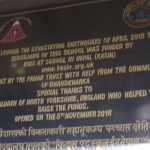 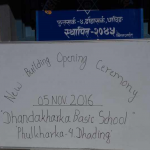 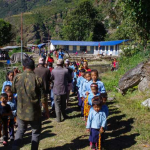 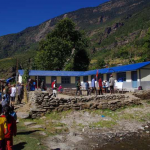 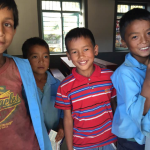 Howard and Sue couldn’t get there so we deputised for the Pahar Trust and laid the foundation stone for a new block amidst further celebration. The Trust had already started to build a 10 classroom block funded through a Gurkha Officer and an independent school in the UK. The next block was awaiting funding. Dinesh was abroad at the time but we were given a warm welcome by the staff. 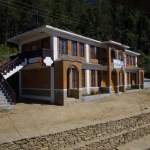 A new and outwardly very stylish classroom block had just been finished, funded by Fruili Mandi and opened by Massimo a few weeks previously. It was designed by a local engineer who Jyoti introduced us to on our first night. All the schools were closed due to harvesting so we didn’t get to see very much. 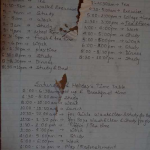 The earth bag houses designed by the French volunteer architects had been finished and were be put to use housing 8 students from the Agricultural College that lived too far away to commute. Jyoti introduced them to us. In return for their board and lodge they were expected to help run the camp and look after the animals and crops that had been introduced. Study time was built into their schedule . The timetable on the wall shows how hard they work.

This is one of Jyoti’s next projects. He thinks that the traditional forms of agriculture around Phulkharka are likely to gradually disappear and be replaced by less labour intensive systems based more on livestock with a likely reduction in local population. The College takes the better students after they have got there SLCs and teaches them for 4 years (Y9, 10,11 and 12) they then get another qualification. 2 agriculture teachers are provided by the government, they are good but retention is a problem in such a remote place. Jyoti is trying to give the students some more practical experience as well as trying to nurture their work ethic. He has bought some good quality cattle and sheep and has got the students to plant a variety of experimental crops such as pineapple, coffee and fruit trees. One student is chosen as leader and we will have his/her email if we need to contact. Costs Jyoti $700 per month for animals and students but Jyoti will sell half the animals to make it more sustainable. School fees cost $10 per month. 2 adults work there,1 is a teacher from Mandali. The students get food and lodge and 800NRS pocket money. Plans are to instal a biogas system for cooking. Jyoti has currently got the money for 5 years worth of funding. It should be cheaper to run in future and he will probably acquire more funding from time to time ( donations from Ecotrek clients for social work)

The electricity wires have now reached the village but it may be a few months before the power is switched on. Hopefully some Wi-Fi may follow which would make a huge difference to staff,students and potential visitors . The Nepali Government is going to alter the local government regions which means that Phulkharka VDC will be retained and will absorb the surrounding VDCs like Gumbi. Phulkharka is likely to grow as a service centre.

There are jobs in agriculture in Nepal for the brightest students who would go on to University. Agriculture is Nepal’s biggest earner. Other students may go on to own their own farms and this course would prepare them well to take on new ideas.

The earth bag houses are adequate for visitors (we stayed in them) but are less suitable for the students so Jyoti would like to build a hostel. Massimo may fund the boys hostel and he asked if KASIN could fund the girls hostel. This seems like a very worthwhile project and well within our remit to promote education in Nepal.

This is the preliminary design but detailed plans and specifications are to follow.

The cost of the girls hostel would be around £12,000. If we were to support this we would need to transfer money to Jyoti in February.

We are in email contact with one of the students in the group and can ask her about the project as well.

The camp could also be used to house international students and volunteers that could help in the schools particularly with the teaching of English. 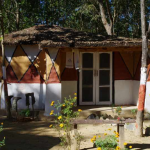 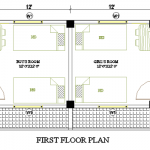 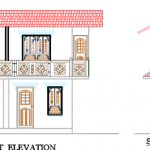 The After School Club in the Kathmandu Valley 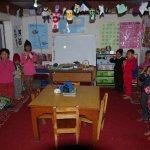 Last year Pat and Liz visited the after schools club and it is reported in last year’s newsletter and is on the website. This year we paid a fleeting visit with Jill and Pam . We were very impressed by the way it had developed and it may be something that KASIN can support in the future. It costs around $1000 per yr. to run and Jyoti has enough money in his trust fund to run it for another year or so.

Teacher training and restructuring of the teaching system in Nepal

The Nepali Government now provides much better training for teachers in state schools. Later this year all teachers will take a test of competency or have to resign (with a golden handshake) This includes the headteachers. Naburas thinks that around half his staff will be replaced) This is potentially very good news and it will be interesting to see the outcome. It may well affect KASIN’s role in the future.

We have a few decisions to make over the next month or so and have an interim trustees meeting on January the 10th.

Liz and I, Jill, Arthur ,Kevin and our new trustee John Peet will be present. If anyone else wants to join us you would be vey welcome.