Also joining us were long-term supporters of KASIN, Wendy Lansdown and Ian Allan as well as Michael and Kate Horn who were travelling to Nepal.

Only about a third of the children were present at the school as it was the Ganga Jamuna festival. We were greeted by Kemal the headmaster, and the leader of the local VDC. We were also joined by Dhurba who used to be headmaster at Shree Mandali before Nabaraj and had been the school inspector for the region.

Kemal thanked us for all that we had done for the school but also made a request that we fund an English medium teacher to meet the government’s ruling that all subjects apart from Nepali should be taught in English.

The school had been impacted by rural depopulation in the hills and the numbers had dropped by about a third. 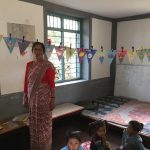 We visited the nursery classroom where KASIN had funded floor covering, furniture, books and equipment. This had made a huge difference and the class was now as well equipped as many private nurseries in Nepal . Liz had brought some laminated resources for the classroom. Pam and Liz spent some time with the nursery teacher, displaying the resources and discussing how they could be used.

The nursery teacher asked us if we could provide an additional toilet for the younger children. At present they have to walk for about 200m alongside the stream to a toilet, a path that is quite dangerous for them in the monsoon season. 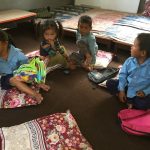 Kate and Michael have connections with a charity that funds sanitation and water supply, wellfound.org.uk. The cost of the project would be about £500

What the school needs is some more teacher training but this would be wasted if they don’t put it into practice. The staff were very keen to receive more training. We met up with Dinesh the day after and discussed it with him. He offered accommodation near his house if we wanted to spend some time there training the teachers and Montari could also be a suitable base. We would need a Nepali translator for it to be effective though.

Durba could act as a go between. 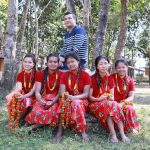 We were very pleased with the design and construction of the hostel and the students loved living there. The lower part of the boys building was used as a store rather than for the animals. The Biogas and solar systems were working well and 4 boys and 4 girls were staying there. The students gave a thank you speech in English and the local politicians were all there to view the opening and made their contribution. 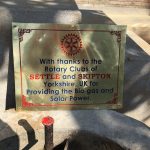 These students would not have had a chance of any post 14 education if it wasn’t for the hostel. They live too far away from Montari to attend on a daily basis and their families could not afford the $10 / month tuition fees.

We were very happy with the project and considered it a very worthwhile venture. We were presented with a very thorough cost breakdown . The total cost of the girl’s hostel including the Solar Power and Biogas system was £16,938 plus  £2000 for the solar. £2000 of the building cost came from money raised at this year’s Round Straven 50 mile cycle event. A Rotary Grant topped up by Skipton Rotary should pay for the Biogas and Solar. 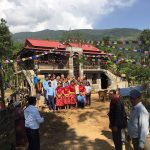 We got to know some of the students and the student leader in particular. We are now in regular contact with him on Facebook so we will get some useful updates about life in Montari. 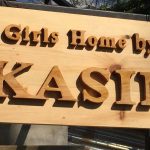 We had a tour of the college and talked to the Agriculture coordinator, Shiv Das. They had plenty of equipment in the store but had a limited amount of very poor land to carry out practical work. He has sent us a copy of the Agriculture syllabus, which seems very comprehensive and quite advanced. Probably at AS level equivalent in the UK. Sadly the success rate for students is low at the college with only 2 achieving a pass grade last year. (one was Dipu’s sister who was the student leader at Montari last year.) The poor results could well be caused by the lack of science background of the students entering the college. Even without a pass result though, the students will benefit from the practical nature of the course.

The school had a new headmaster who was conspicuous by his absence. The grounds seemed very rundown and little progress had been made with the library even though it was now 2 years since the earthquake. This would not be a good place for KASIN to invest any funding at the moment.

All in all we have decided to wait until things settle down in Phulkharka before investing in any larger projects. If things change we would have some excellent advice on the ground from Dhurba and also Dinesh, who has been reinstated at the Head at Tamang Kharka.

The After School Club in the Kathmandu Valley 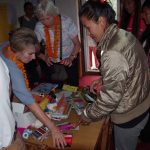 This was still thriving and the building had been given a new coat of paint. Dikki Sherpa, had got a new job elsewhere but was still employed as Team Leader for 40 working days. The new teacher- Rupa Maharjan was employed for 200 days/yr and an assistant, Urmilla  for 150 days. We were presented with a detailed budget for the year of almost £1000 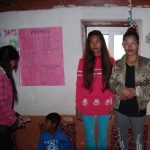 Again we thought that this was a very worthwhile project.  Dikki Sherpa asked if we would consider funding some training for Rupa at the local Montessori training centre. This would cost about £75.

The Moran Memorial and Deonia Schools near Jhapa

These schools were a good 12 hour journey from Kathmandu by road and this is the location for our student sponsorship program .

The schools are very well run, by a great team of Jesuit priests. They provided us with accommodation and food and gave us a good insight into the workings of the 2 schools. We discussed the practicalities of the sponsorship program and was agreed that this would be done anonymously to avoid any issues between those who were and were not sponsored. The children all come from very disadvantaged backgrounds and pay less than £2 / month to attend the school. Even this is too much for some and the school provides sponsorship for those who cannot afford it. The true cost of educating the students is around £8.50 /month. At this cost we are currently funding about 30 children.

This video gives some good background to the school.

The staff are very committed but lack training and are using some very dated resources. The library in particular needs some attention. 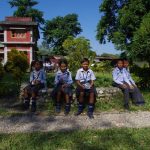 We have been approached by a teacher at St Mary’s College in Hull ,a school that also  specializes in teacher training in the UK. They would like to set up links with Moran School in Deonia and we are trying to enable this.

Raja the Head at Moran School will write to each sponsor and thank them for their involvement.

Again, we came away thinking that this was also a very worthwhile cause and provides some good education for children that would have little hope otherwise.

Liz and John visited KTS and talked with Kiran, the principal.

We explained that Kids at Kumbeshwar would now come under KASIN’s wing and that we would have around £2500 by April, which could be used to fund a suitable project at the orphanage or the nursery. We have asked Kiran to identify a suitable project.

Again, we thought this a very worthwhile project that could benefit from the UK charitable status that KASIN has.